Things I pondered while running my first 1/2 marathon 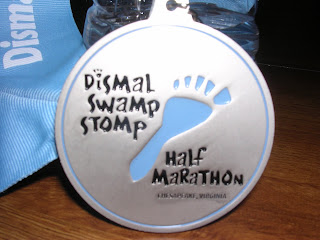 You know that the guys who start the race already missing their shirts are some serious running dudes. I was fairly certain they would not be behind me.

The fanny pack that can hold 3 water bottles…how cool is that?!

One of the advantages to being in the back half of the race. I was on mile 3 when the leaders of the race started to pass by me, they were already on mile 10. For two or three miles I was in a state of awe. My mind stayed occupied watching them and I was able to entertain myself by cheering for each one as they passed by me….I even yelled out “You’re my hero!” once. It was fun.

Realized every so often that I was wearing a big silly grin on my face.

Got to mile 8 and thought…wow…in the 38 years that I have been alive I have never run more than 8 miles at one time. This was new uncharted territory for me and I was loving it!

I was beginning to drag at mile 11 but then remembered that I was going out for sushi with friends later in the evening…that happy thought alone supplied me with enough adrenaline to keep me moving for at least a 1/2 mile.

At 12 1/2 miles the song All Because of Jesus randomly started playing on my iPod. Pretty nice way to end my run. Think I will end this post with that song too.