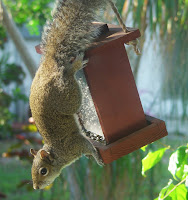 Inspired by friends who make bird watching look like so much fun, I recently decided to hang a couple bird feeders in my front yard. I carefully picked out a nice pole to hang my feeders from, assembled it and stuck it down in the ground outside my living room window. I picked a perfect spot where I could sit on my couch, drink coffee and observe my new feathered friends.

I eagerly filled both of my feeders with food. Certainly, the whereabouts of the new dining facility would quickly make its way around the neighborhood- word of mouth…or word of beak, I guess. The next morning, less than 24 hours later, my feeders were completely empty. At the base of the pole were the most likely culprits- squirrels! Five squirrels to be more specific- three of which seemed to be moving in slow motion-certain food coma had already begun to set in, while the other two thieves were doing their own little version of the touchdown victory dance around the pole. Score!

My dog, Bisbee, now has a new job- squirrel patrol. I think she is somewhat confused that I am encouraging her to chase the squirrels from the yard. But, she has taken her job quite seriously for the past couple of days. I’ve noticed she has been testing out two methods of attack. The sneak attack and the rush attack. So far, she has been unsuccessful at snagging one for her dinner. I cheer her on from the sidelines, but secretly would be horrified if she ever actually caught one. I just want to put the fear of dog in ’em!