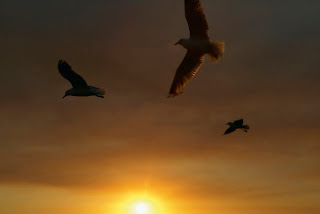 Last night I was channel surfing before going to bed and I came across a talk show host who was talking to the lead actor from the TV show Lost. I never got into watching this show. I know that when it first came out it was about this plane that crashed on some island and a group of people were stuck there. Apparently, last night was the show’s last episode after six seasons. It amazes me that the writers of the show could find six years of story from this idea! That’s pretty impressive.

I gathered from the conversation that the last episode talked about death and what the after-life is like. The talk show host brought up Christianity and in his own words summed up what Christians believe. Here was his definition. Good people go to heaven. Bad people go to hell. I always feel slightly sad when I hear people define Christianity like this.

My small group recently studied the book of Galatians. It amazes me that 2000 years ago Paul was preaching against this distorted view of Christianity…and today people still have a huge tendency to define it this way. I can almost see Paul walking into that talk show studio shaking his head and sternly telling the audience…”No, this guy is missing the point. It is not about bad versus good. It’s about law versus grace! No amount of good- and rule keeping- is gonna get you there!

Here are a few favorite verses on the subject.

“If God’s promise is only for those who obey the law, then faith is not necessary and the promise is pointless. For the law always brings punishment on those who try to obey it. (The only way to avoid breaking the law is to have no law to break!)” Romans 4:14-15 NLT

“God saved you by his grace when you believed.(Stress mine) And you can’t take credit for this; it is a gift from God.” Ephesians 2:8 NLT

“Christ has set us free to live a free life. So take your stand! Never again let anyone put a harness of slavery on you. I am emphatic about this. The moment any one of you submits to circumcision or any other rule-keeping system, at that same moment Christ’s hard-won gift of freedom is squandered. I repeat my warning: The person who accepts the ways of circumcision trades all the advantages of the free life in Christ for the obligations of the slave life of the law. I suspect you would never intend this, but this is what happens. When you attempt to live by your own religious plans and projects, you are cut off from Christ, you fall out of grace. Meanwhile we expectantly wait for a satisfying relationship with the Spirit. For in Christ, neither our most conscientious religion nor disregard of religion amounts to anything. What matters is something far more interior: faith expressed in love.” Galatians 5: 1-6 (MSG)

It is such a relief to know that my salvation does not depend on me being “good” enough. I would never measure up!