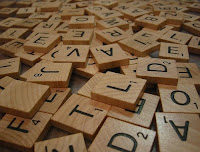 I love playing Scrabble. I love the game so much that I thought I would find out a little bit more about the history of the game.

If you want to read more about the fascinating beginnings of this game go to http://www.mattelscrabble.com/en/adults/history/page1.html