I’ve been thinking about rocks. Last week while back home visiting my family in Arizona, we took a ride up Mt.Lemmon which is located in the Catalina Mountains in Tucson. It’s been about 20 years since I’ve had the opportunity to do this and I looked forward to sharing this beauty with my husband and my son. When I was a child, there was always one thing I would watch for as my dad drove the family up the side of this mountain…the rock shaped like Donald Duck. I was eager to show this rock to my son. 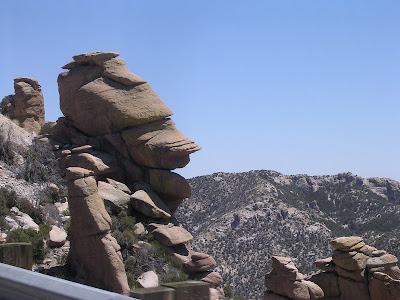 What do you think?
Does it look like Donald Duck to you? 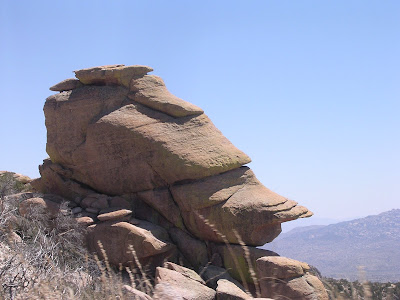 While visiting my dad last week my routine was to take my morning cup of coffee outside onto his back deck and sit on his porch swing. Every morning as I sat listening to the doves and watching the sunrise over the mountains the memory of another significant rock would come to mind. About eleven years ago, I moved back to Arizona for about eight months. It was during a season in my life when I was starting over.

A failed marriage brought me back to my dad’s doorstep at 27 years old. My dad lived about 10 minutes from where he lives now and in the house where I spent a large portion of my childhood. Eleven years ago, I moved back home to get back on my feet. It was hard to come home after living on my own for several years. I was sure my dad would have a hard time treating me like an adult. But, after discussing my concerns with him, he completely understood and suggested I stay in the “guesthouse” so that I could have some independence and privacy. I readily agreed.

I was very very thankful for this place to stay but I think I should describe the accommodations. I jokingly would refer to this house as the “shack out back”. It was originally a storage building that my dad had converted into living space. It had one large room and a small bathroom. The large room, which I used as my bedroom, had a wood burning stove for heat. I knew this would be a special experience from the moment I moved in and discovered two dead mice floating in the bathroom toilet.

During the winter, I would get a fire going every night in the wood burner. After several trial and error attempts, I got pretty good at making a fire that was hot enough to keep me warm at night but not so hot that I was breaking out in a sweat in my tiny living space. My dad also had an extra microwave oven which fit perfectly on the small counter in the bathroom. I was able to cook my morning oatmeal, make my morning coffee, and shower all in the same room. That’s pretty cool…depending on your perspective. But, this was a season in my life when I was deeply grateful for things we sometimes take for granted. I was thankful for a bed. I was thankful for a bathroom. I was thankful for a microwave.

Every morning, before the sun rose, my routine would be to stick a cup of water in the microwave and make myself a cup of instant coffee. (Definitely not my first choice, but I didn’t have a coffee pot so I was content with what was available.) I would then take my instant coffee, grab my bible, wrap up in a blanket and head outside. I always went to the same spot…a big flat rock which was perfect for sitting on and relaxing. Eventually, my dad started to refer to me as a rock lizard because he always saw me sitting on this one rock.

While I lived in the “shack out back,” I returned to that rock every single morning. I looked forward to this time I got to spend reacquainting myself with the Lord. I had ignored Him for years and now we were talking again on a daily basis. Some days, I would just sit quietly sipping my coffee while He spoke truth into my heart. Other times, I would ask for advice or cry out to Him for wisdom. I loved sitting on that rock every morning! Even though my world seemed to be falling apart, I treasured the times I spent on that rock. Choosing to go and to sit on that rock every morning was the beginning of huge life change for me.

I now see that rock as a symbol. Eleven years later, and every morning when I wake up I have a choice to make. I have to decide. Will I choose to go to the Rock? Today, I am thankful to say, I can now make this choice with a cup of freshly ground coffee that has been brewed in my coffee machine!

6 thoughts on “coffee… on the rocks”