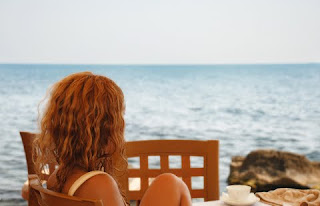 Sometimes I feel as if I catch a small glimpse of His glory. For a split second I understand fully and then it’s gone. It’s almost like trying to remember a dream. A really good dream. You know it’s good …you just can’t put your finger on all the details that make it good. You can’t fully wrap your brain or heart around it. But somehow it still fills you with hope and that hope fills you with joy.

One of my favorite movies was on TV last week, The Shawshank Redemption. The movie is about a friendship that forms between two men who meet in prison…one who is justly convicted and one who is wrongly convicted. It’s one of those movies that when I am channel surfing I just have to stop and watch some of it. So many great scenes and lines. So many great messages about hope and freedom. The movie always makes me appreciate my relationship with Christ and his ability to redeem us, to give us freedom and to fill us with hope for a life spent with Him in eternity.

There are a few lines from the movie that seem to make my heart happy.

I have no idea to this day what those two Italian ladies were singing about. Truth is, I don’t want to know. Some things are best left unsaid. I’d like to think they were singing about something so beautiful, it can’t be expressed in words, and makes your heart ache because of it. I tell you, those voices soared higher and farther than anybody in a gray place dares to dream. It was like some beautiful bird flapped into our drab little cage and made those walls dissolve away, and for the briefest of moments, every last man in Shawshank felt free.

I find I’m so excited, I can barely sit still or hold a thought in my head. I think it’s the excitement only a free man can feel, a free man at the start of a long journey whose conclusion is uncertain. I hope I can make it across the border. I hope to see my friend and shake his hand. I hope the Pacific is as blue as it has been in my dreams. I hope.

Romans 8: 18-25 (NLT)
Yet what we suffer now is nothing compared to the glory he will reveal to us later. For all creation is waiting eagerly for that future day when God will reveal who his children really are. Against its will, all creation was subjected to God’s curse. But with eager hope, the creation looks forward to the day when it will join God’s children in glorious freedom from death and decay. For we know that all creation has been groaning as in the pains of childbirth right up to the present time. And we believers also groan, even though we have the Holy Spirit within us as a foretaste of future glory, for we long for our bodies to be released from sin and suffering. We, too, wait with eager hope for the day when God will give us our full rights as his adopted children,including the new bodies he has promised us. We were given this hope when we were saved. (If we already have something, we don’t need to hope for it. But if we look forward to something we don’t yet have, we must wait patiently and confidently.)

6 thoughts on “hope is a beautiful thing”