The other day my seven year old son and I had some time to kill before his eye doctor’s appointment so we decided to go next door and look around Ollies Bargain Outlet. Ollies is one of those discount stores where you can find almost anything. We wandered up and down the aisles for a few minutes.

As we stood in the picture frame aisle my son looked at one picture and comments, “Well, I know why no one’s bought that picture.”

“Because nobody knows who that girl is!”

“Sean, people buy the picture and replace it with people they do know.”

His comment made me laugh. Sometimes, he blurts out some of funniest stuff. But, his comment also made me think about this tendency…

And, I realized this was the case for me when I saw the next poster in the People Of The Second Chance(POTSC) Never Beyond poster series. 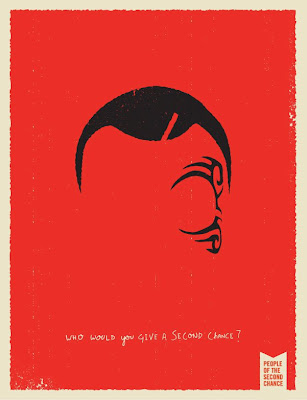 Do you know who this is? This is Mike Tyson. I have to admit, I don’t know much about Mike Tyson beyond the fact of him being a convicted rapist and the crazy dude who once bit a portion of some other boxer’s ear off.

I am tempted to view Mike Tyson similar to the way my son viewed the generic picture in Ollies the other day. I don’t know that person, why would I buy that picture? Why should I care about him?”

But, regardless of whether I know Mike Tyson or not, I do know one thing…God knows Him. We are tempted to see just a generic face in a picture frame of a person who is guilty of some serious mistakes in his life…but God sees him as something more than just another face. God sees Mike Tyson as another one of His children who He chose to purchase by going to the cross for.

We are not just another face to our Creator. He loves us and was willing to go to extreme measures to purchase each one of us!

If you missed my post last week, here’s a recap of what this post is all about. Over the next few weeks POTSC will be revealing 25 posters representing well known historical, current and fictional characters who are believed to have harmed society. This campaign consists of digital and print posters and the full collection will eventually be displayed as a touring art exhibit.

The campaign draws out themes of forgiveness, grace and what a pathway to a second chance looks like and will prompt us to ask ourselves this question…who would you give a second chance?

You can read more about the campaign HERE

9 thoughts on “Not Just Another Face”