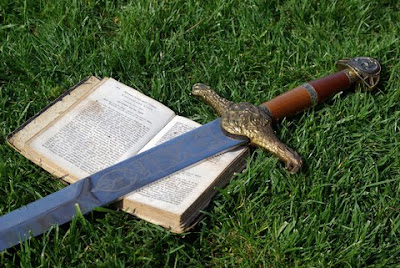 “Several days later Felix came with his wife Drusilla, who was Jewish. He sent for Paul and listened to him as he spoke about faith in Christ Jesus. As Paul talked about righteousness, self-control and the judgment to come, Felix was afraid and said, “That’s enough for now! You may leave. When I find it convenient, I will send for you.” At the same time he was hoping that Paul would offer him a bribe, so he sent for him frequently and talked with him.” (Acts 24: 24-26)

Like I said, I don’t know much about this chapter in Acts but one thing that hit me as I was reading this was…

Truth will make us feel uncomfortable when we are not ready to hear it. It will make us squirm. It will scare us. It will make us want to run away or tune out the words of the person speaking truth. Truth penetrates the heart like a sword. I might be wrong, but it looks to me as if Felix was in conflict. The truth hurt (as the familiar saying goes) and yet he still continued to pursue Paul in hopes that he would cave and offer him a bribe. The sinful nature comes face to face with truth.

When we are ready to hear the truth our hearts are receptive and embrace it as the air that helps us breathe. When we are not ready to hear truth it is painful and our sinful nature will fight hard against it. This fight can be so exhausting too.

I have no idea what happened to Felix. I don’t think he is mentioned again after he chooses to leave Paul in prison. But, I think his brief talk with Paul about the Truth stirred something in him.

I think this is just a good reminder for me today. When someone is speaking to me about Biblical truth. I have two choices. Embrace it or tune it out. If what they are saying makes me uncomfortable, perhaps instead of shutting down I need to choose to open up and let the truth change my heart.