I am taking cupcakes to my son’s 1st grade class today in celebration of his birthday. Every year I have visions of being creative when it comes to his cake. This year, I thought I would think outside the box (pun intended) and make cupcakes instead of a cake.

I found a creative cupcake idea on the internet. It appeared to be within my range of creative difficulty. On a scale between “so easy a child could do it” versus “best to be French and have studied all things culinary”… it was much more the former. It was a unique looking “shark” cupcake made with different candy toppings. I studied the picture, took a deep breath, and boldly picked out one of my recently baked and cooled cupcakes to be my creative “guinea pig”. To make a long story short, my creative shark cupcake ended up looking more like a guinea pig. Sigh.

Opted for boring- yet colorful cupcakes. 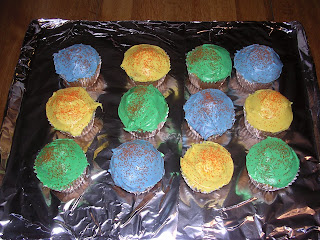 I am thankful that boring cupcakes are just as tasty as creative ones.