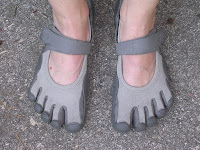 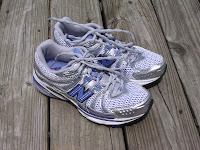 For my birthday, I told my husband that all I wanted was a pair of the Vibram Five Finger shoes for barefoot style running. My husband has been running barefoot style for about six months. He absolutely loves it. Instead of the five finger shoes, he purchased material to make his own barefoot running sandals.

I have to admit, I was skeptical. Prior to running barefoot, my husband had practically given up running because his knee would swell so much and running was not fun anymore. Now, his knees do not swell, his joints do not ache, and he is able to run miles and miles. I was intrigued.

I discovered a few months ago that my oldest brother prefers barefoot running too and is planning on running a marathon in December with this style of running.

I decided to at least try this style of running even though it is out of my comfort zone. With normal style running, my knees tend to start aching after about six miles so I am interested to see if the barefoot running helps this problem. I would really like to still be running when I am sixty or even seventy year old, so perhaps this is one way to alleviate some of the harshness on my knees.

I have had my new shoes for a week now and have been easing into the different running style. I was a little too eager the first run and did three miles. My husband warned me not to, but I was so excited to test them out. Everything went great, except two mornings later, my lower calf muscles were so stiff when I got up out of bed, that I could barely walk down the stairs. I am now using leg and foot muscles that I don’t think have been used in years…if ever. It is definitely an adjustment.

The next time out, I only did about a mile and a half. Today, I did my normal four mile route and it was easier than the previous two runs. About three miles into my run I actually “forgot” I was running differently and was just running. That was a neat feeling. When I got home, I felt like I could have kept going but I kept hearing my husband’s voice in my head repeating his warning….start off slow, don’t over do it.

The verdict is still out as to whether or not I will prefer this type of running. But, I am enjoying the experiment. Who knows, I might actually discover something new that I really love doing. If not, I’m sure New Balance would be happy to take me back as a customer!

One thought on “Shoes or no shoes…that is the question”