I have heard it suggested that people should have to take classes before becoming parents. I tend to agree. One mandatory class I would recommend be offered for us parents would be Tooth Fairy 101. I am certain I would be a much more reliable and conscientious fairy had this particular class been offered when I was considering parenting .

So far, my six year old son has lost three teeth, two bottom ones last year and a top middle one last night. He lost his first tooth one morning as we were heading out of town on vacation to Washington, DC. I assured my son that the Tooth Fairy would be able to find him at our hotel. (Looking back, I am pretty proud of myself. I was able to come up with that excuse without the help of special tooth fairy classes.) I even remembered to swap the tooth out and leave shiny coins under his pillow in the hotel room, brilliant work!

However, this is where my skills as a tooth fairy end. Since then, I have only managed what I call “sloppy saves”. Sloppy save number 1 happened on lost tooth #2. I went to bed and totally forgot to swap out Sean’s tooth for treasure. My son woke up and noticed the tooth was still where he carefully left it under his pillow. To my credit, I did come up with the best excuse I could think of on the spot.

“Honey, you get up really early, perhaps you beat her here this morning.” 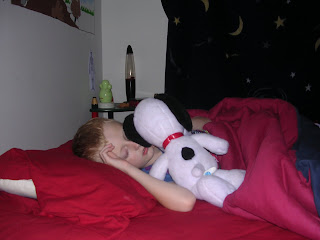 I then suggested he go use the bathroom. You probably can guess what happened next…the tooth fairy DID show up while my son was in the bathroom. Wow, that tooth fairy is not only smooth but so fast I did not even see her. After many interrogating questions from my son on how this could be possible, he finally accepted the explanation and happily put the treasure in his bank.

This brings me to sloppy save number 2. Sean lost his 3rd tooth last night, on the 4th of July. We had just returned from a day at the ocean. The tooth had been threatening to fall out for a couple months. Last night, while eating dinner at a restaurant down at the beach it got to the point where it was literally only hanging on by a thread. Sean worked on it and worked on it as we drove home and moments before going to bed, his work paid off. Tooth # 3 was out… and ready for the smooth Tooth Fairy.

We put his tooth in a zip lock bag and placed it under his pillow. My son went to bed feeling pretty darn satisfied. I was pretty satisfied too…he looked so cute with a missing top tooth! Later that evening, I went to bed, once again forgetting that my job was not finished. Fortunately, I woke up in a tooth fairy sweat at 5:10 this morning and jumped out of bed.
My concerned husband asked me what was wrong.

I quickly grabbed some coins and ran down stairs. As quietly as I could, I snuck into his room. Just as my hand reached his pillow he groggily awoke.

I smoothly distracted him by telling him I was just checking on him and wondered if he needed to go to the bathroom. Just like that, my hand moved carefully under his pillow and the switch was done, just in time too. Sean did not answer my question but quickly sat up in bed…remembering. 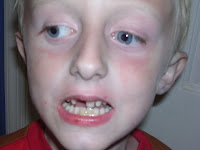 He slid his hand under his pillow and, lo and behold, four shiny quarters were there to meet his fingers.

(The Tooth Fairy must have been feeling a little guilty, cause she usually only leaves fifty cents.)

I am convinced that Tooth Fairy parenting classes would have prevented such sloppy and reckless tooth/treasure exchange. Fortunately, I have 17 more chances to redeem myself.