My friend, Mike Gothard, just wrote a great post on roller coasters. If you have a desire to reminisce about your wildest ride, strap yourself in, and click on over to his post.

Reading it almost made me want to ride another roller coaster. Almost.

I wish I could say I love roller coasters. I want to love roller coasters. I sometimes wish I had a more daring, spontaneous, and adventurous side, but to voluntarily strap myself onto a fast moving object that flings me and jerks me and gives me that oogey, I-want- to-throw-up-the-last-three-meals-I-have-eaten feeling, does not seem logical to me.

Mike’s post made me think of my two most memorable roller coaster experiences. They are my two most memorable because I am pretty certain I have only been on two. The first was when I was sixteen. I was visiting my oldest brother in San Diego. He, and his then girlfriend, took me sightseeing one evening and we ended up at Mission Beach. I had never been to Mission Beach before.

As we walked around, my brother suddenly said, “Hey, Eileen, you want to go to a dog show? There’s a dog show not too far from here.”

“Wow! A dog show! I love dogs! Sure!” My brother is so thoughtful!

We meandered our way through the park and as we came around one corner we suddenly stopped. We were in a line. I looked around. There were no cute doggies anywhere. The only thing I saw was this roller coas…. wait a minute!

They begged me and reassured me that everything would be okay. Eventually, I think they must have bribed me, because I finally agreed to ride it.

It was the Giant Dipper, a historic wooden coaster built in 1924. It is the fifth oldest roller coaster in the United States. Standing only 70ft tall, I guess the Giant Dipper would be considered a “hypo”coaster compared to the 200-400 feet coasters that Mike described in his post. I don’t know what someone would have to bribe me with nowadays to get me to ride something that big.

By the grace of God, I survived my ride on the Giant Dipper. I was completely terrified the entire time and still question why people deliberately put themselves through the “torture”. I have to admit, I don’t get it.

I was persuaded to try another roller coaster a few years later while on a trip to Disneyland. I mustered up enough courage to ride Space Mountain. Out of the two coasters I have ridden in my life, I would say this was the one I disliked the least. The ride is in the dark. I loved being in the dark! It was a brilliant concept. If the coaster was to suddenly miss a turn and fly off the track, I wouldn’t be able to see it happening. Brilliant, I tell you!

I survived that ride too.

I figure if I am anything like a cat, I have seven more successful roller coaster rides to look terrifyingly forward to someday. I have a feeling when my son is a little older, I will be bribed to ride one again.

The kiddie-coaster…my kind of coaster 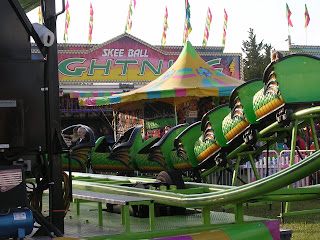