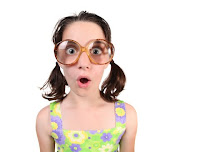 I started wearing eyeglasses in the 4th grade. It all started in Mrs. Donovan’s class when I came home from school one day and complained to my mom that Mrs. Donovan’s handwriting was so bad that I was having a hard time making out what she was writing on the chalk board.

My mom scheduled me an appointment for an eye exam and I have been wearing corrective lenses ever since. My eyesight became increasingly worse over the next few years, which prompted me to switch from eyeglasses to contact lenses in high school. I was so self conscience in my extremely thick eyeglasses. It was before the time that lenses were shaved down. So, it was very hard for this {trying very hard not to be a nerd}nerd to walk around campus and look even halfway less nerdy with HUGE magnifying glasses attached to her face. Looking back, I’m sure it wasn’t that bad, but at thirteen I tended to blow everything out of proportion.

So fast forward to nearly 15 years later. Yesterday, I made the choice to purchase some contacts after my eye exam. I thought it would be nice to have the option of wearing contacts again. Now that I am doing more long distance running, contacts would be easier to wear while exercising.

Let me just say, that I have done a little bit of aging in last 15 years. I was shocked! I still feel like I am 23 years old. But the lines around my eyes tell a completely different story.

I wonder if this is how Adam and Eve might have felt when their eyes were opened to their nakedness. I felt so exposed. I could now see more of my flaws that for years I had been able to hide to some extent behind my eyeglasses. I wanted to cover up! Where’s a fig leaf when you need one!

The next thought that went through my mind was the words that God spoke to Samuel while on his quest to find the next king.

“The Lord doesn’t see things the way you see them. People judge by outward appearance, but the Lord looks at the heart.” (1 Samuel 16:7 NLT)

“There is far more to your life than the food you put in your stomach, more to your outer appearance than the clothes you hang on your body. (OR whether you choose to wear eyeglasses or contact lenses)…Who of you by worrying can add a single hour to his life?”

So, today, I rejoice over my exposed face. I woke up again today. I have the opportunity to live again today. Whether I choose to do it wearing contact lenses or eyeglasses…really doesn’t matter. It’s a non-issue. My Heavenly Father loves me…wrinkles and all!