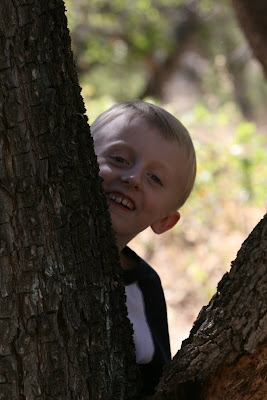 Yesterday, I had the following conversation with my seven year old son on the drive home from school. He was sharing with me something his friend had done on the playground that afternoon.

Me: Wow, Honey, that’s really cool! You know what that’s called, don’t you?

Me: Sacrifice. He sacrificed himself for you so that you could stay in the game. Honey, that’s a really special friend, don’t you think?

Me: Have you ever done that for him?

Sean: No, but I’m going to tomorrow!

You can probably already guess where this post is headed.

For the remainder of our drive home, I was thinking about another sacrifice, the One who sacrificed Himself so that we could stay in the game too. We should have been tagged out…but Christ ran interference for us. A self-less act. A game changer. Because of His sacrifice on the cross…we win!

Do nothing out of selfish ambition or vain conceit. Rather, in humility value others above yourselves, not looking to your own interests but each of you to the interests of the others.
(Philippians 2:3 NIV)

Christ arrives right on time to make this happen. He didn’t, and doesn’t, wait for us to get ready. He presented himself for this sacrificial death when we were far too weak and rebellious to do anything to get ourselves ready. And even if we hadn’t been so weak, we wouldn’t have known what to do anyway. We can understand someone dying for a person worth dying for, and we can understand how someone good and noble could inspire us to selfless sacrifice. But God put his love on the line for us by offering his Son in sacrificial death while we were of no use whatever to him.