I keep thinking about a conversation my seven year old son had with his seven year old cousin when she came to visit us a couple weeks ago. My husband and I were driving them to the movies and they were talking to each other in the back seat of the car.

Sean began telling his cousin about a time when a bee stung him on his finger while he was playing in the swimming pool way back when he was three years old. After sharing, Sean’s cousin made the comment that at least he was really young when it happened and probably couldn’t remember the experience very well. Sean’s response to her, “I remember pain.”

Our son’s response made my husband and I laugh. It just sounded so dramatic coming for our little seven year old whose biggest trial so far in life (I am grateful to say) has been having to go to school five days a week! His life thus far has been relatively pain-free and to steal my son’s most recent favorite phrase. It’s been “easy peasy lemon squeezy”.

My husband and I amused ourselves for the next few minutes by concocting up a scene in a movie with Sean as the lead character. We could picture him playing a Clint Eastwood type role, sitting in a smoke-filled, dimly lit room retelling his hardships in that classic Eastwood voice…“Pain? You wanna to talk about pain? I remember pain.” he says, as he takes a long, slow puff on his cigarette.

Let me just interject here and say I hope my son never picks up smoking but the scene in my mind played out beautifully with a deep voiced character slowly puffing away on his cigarette.

Now, on a more serious note, my son’s response got me thinking about painful memories from our past. We might not remember the specific details of being hurt but we do remember the pain. Our memories might fade, but pain often leaves a lasting impression on us.

Perhaps because Easter is right around the corner, but I was thinking of the pain Jesus endured on the cross on our behalf…talk about a memorable pain. I wonder how often he thinks about that pain?

This thought made me think of something else. What an amazing example we have in the cross. God takes the most painful, horrific event one can imagine, the crucifixion of His only Son, and turns it into the most beautiful victory one can imagine.

Pretty certain there has never been a more incredible example of how pain can lead to triumph when placed in the hands of our Creator. What might look hopeless actually becomes hope-filled. What might look crushed and worthless becomes restored and purpose-filled and full of life! 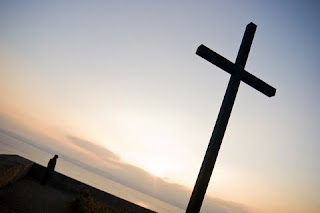 What about you? How has God used a painful experience in your life to lead you to victory? Are there times in your life when you can say yes… I remember pain BUT I also remember how God was able to use that pain to glorify Him and bring about healing in my life.

7 thoughts on “The day my son became Clint Eastwood”