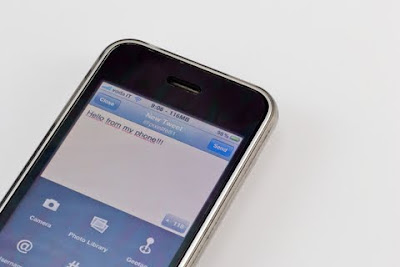 So, a couple months ago I decided to join Twitter. I guess it was only a matter of time. First facebooker, then blogger…now tweeter. I wonder what’s next? What I find kind of amusing about having Twitter is that I don’t actually own a cell phone that tweets. My husband and I might be the last two people left on earth who own phones that don’t tweet. I’m holding out on getting a fancy dancy phone cause I hear there might be some sort of monetary prize handed out for those who hold out the longest. That might just be a rumor.

Instead, we’ve chosen the old-fashion style cell phones. Do you know the ones of which I speak? The ones that were designed to…make phone calls. About a year ago, our cell phone contract ran out and we were given the opportunity to purchase newer, “smarter” phones. I just couldn’t bring myself to do it. My reasoning?

I know something scary about myself. Me and 24 hour access to the Internet would not be a good thing. It would not enhance my life. I am fairly certain if I had one, I would never interact with my friends and family, except online, of course. I would become an expert interacting that way. I would probably have to buy my seven year old son a phone too just so we could spend some quality bonding time with one another. Although, I’ve never owned one, I completely understand why the BlackBerry was nicknamed CrackBerry.

I fear that if I owned a fancy dancy phone it would bring out the worst in me. I tend to have an addictive personality. I think 24 hour easy online access would be as tempting to abuse for this recovering addict as alcohol. It would be like toting a bottle of red wine with me everywhere I go. Heck, if cell phone designers ever started marketing a wine bottle shaped BlackBerry, I might have a hard time resisting. 😉

So, for now, I am enjoying my new Twitter experience via my laptop…or maybe I should refer to it as my CrackTop.

Perhaps, I am not one of the last people on earth who can’t tweet from their phone.

If you do own a fancy dancy phone, let me know how you manage your time. I would love to know how to own one and not abuse it.

11 thoughts on “My Secret Fear of Smart Phones”