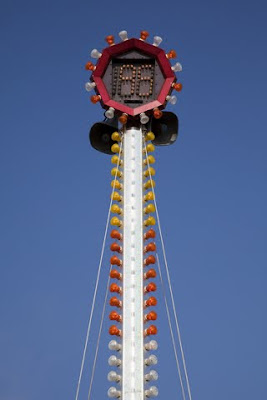 You know that ring the bell game at the carnival similar to the one in this picture? It’s the game where you have to take a mallet, hit a pivot board as hard as you can, and try to get the indicator to travel up the scale board. The harder you hit board, the better the chance it has of moving all the way up the scale and ringing the bell at the top.

We often respond to sin much like this game. We carry around with us these mental scale boards in our head and we often judge the severity of the sin simply by how far up the scale the sin climbs. Did it ring the bell or not?

If the sin doesn’t appear to harm anyone, then it doesn’t travel very far up the scale and we sometimes ignore it. No harm done. But if the sin does extensive damage, it travels up our scale board and rings our bell.

We love to rank sin. Sometimes we do it and we are not even aware we are doing it. This one is forgivable. This one is not. This one rings our bell. That one does not.

We tend to forget, that God doesn’t weigh sin in our lives like this. The sin that barely moves up the scale disgusts him just as much as the sin that shoots to the top of the scale.

What about you? Do you tend to forgive or not forgive someone by the severity of their sin?

7 thoughts on “When Sin Rings Our Bell”